Freight continues to flow in, capacity does not increase sufficiently

Our team at Lazrtek found an article from FreightWaves.com written by Todd Maiden that is really useful for catching up with the industry. Let’s get to it.

Another surge of loaded inbound containers on the way

Expectations around future freight flows continue to grow with each passing week. New records are being posted with no sign of a falloff on the horizon.

Stimulus payments are spurring along already robust consumer spending while the need to replenish inventories lingers. The combination appears likely to keep the upside of the freight cycle on track even as the year-over-year comparisons become more formidable in the back half of the year.

The National Retail Federation again raised its outlook for retail container imports to key U.S. ports. The group expects first-half 2021 twenty-foot equivalent units (TEUs) to increase 33.9% year-over-year to 12.7 million. The group’s prior forecast called for a 26.9% increase; 23.3% was the forecast before that.

The year-over-year comparisons are reflective of COVID-related interruptions in 2020, which knocked China’s manufacturing segment offline for a stretch and led to widespread domestic lockdowns that cut into freight demand.

TEUs hit a new monthly record in March, rising 64.9% year-over-year to 2.27 million. The previous monthly record was 2.21 million TEUs, which was set in October. March volumes increased 21.2% from February, which was the strongest February recorded since the NRF began tracking the data in 2002.

“Despite the continuing pandemic, most consumers are in good financial health and aren’t hesitating to spend,” said Jonathan Gold, VP for supply chains and customs policy at the NRF, in a statement announcing the improved outlook. “More spending translates into more merchandise arriving at our ports as retailers continue to meet increasing demand. The cargo surge that began last fall doesn’t show any sign of stopping. Unfortunately, disruption and congestion issues are also continuing.”

Freight Waves data shows inbound bookings have been at an elevated level for nearly a year now, stepping even higher in recent weeks. Ocean bookings to the U.S., measured as a 10-day-moving average of volume being tendered with ocean carriers and freight forwarders, shows that inbound traffic is coming in at a record pace. The data is forward-looking and provides insight into volumes before they depart a port of origin.

Outbound container bookings from China to the U.S. are supportive of the trend as well.

The NRF’s forecasts call for a 12.2% year-over-year increase in retail container imports in July but the comps begin to normalize in August (+6%) and September (+1.3%). Those year-ago periods represent an economy mostly reopened following lockdown mandates as well as retailers positioning themselves for the holiday buying season.

The prospect for year-over-year growth in shipments appears favorable through the end of summer. However, September and October could have a say in the growth trajectory for the rest of this freight cycle.

The 2020 peak-season overcame the COVID-related weakness in imports recorded earlier in the year. Full-year inbound domestic container shipments rose 1.9% year-over-year to 22 million TEUs and eclipsed the prior record set in 2018.

September will be an interesting marker for the current cycle. The comps stiffen significantly, reflective of all-time highs in some instances. Also, enhanced federal unemployment benefits are expected to end on Sept. 6, presenting another hurdle.

Pressure on freight volumes could be felt earlier than the fall as many states continue to lift COVID restrictions as the summer travel window opens. Some economists have said that a broader economic reopening would favor spending on events and services, drawing down amounts spent on hard goods, thus negatively impacting freight demand.

However, there is a growing group of analysts and economists that believe the benefits from a full reopening will boost employment and spending to a level that would overcome any transition in spending to favor services. Some believe the heavy flow of stimulus dollars has built up the economy to a level where the consumer is strong enough to spend on both goods and services.

“Consumers are demonstrating that when they feel safe, they are both willing and able to spend and are driving the economy forward. The CDC’s updated guidance for fully vaccinated individuals will help further open the economy and get more people back to work,” said Matthew Shay, NRF president and CEO. The comments were made in a press release Friday discussing retail sales in April, which maintained the step higher recorded in March and were 51.2% higher year-over-year.

Another compelling catalyst for a sustained high-demand freight environment is inventory levels, which are still depleted. The retailers’ inventories-to-sales ratio dropped to 1.1x in March from 1.23x in February, according to Census Bureau data. The latest reading is an all-time low and well below pre-pandemic levels of approximately 1.45x.

What happens with the year-over-year comps in the fall likely won’t matter. Flat or a modest step down in shipments will still keep the industry operating at near-record levels. Further, the current environment has a capacity issue even when compared to past robust freight markets.

Drivers remain in short supply as other income streams (stimulus and enhanced unemployment benefits) are available and comparable labor markets like construction and warehousing remain strong. Heightened compliance with the Drug & Alcohol Clearinghouse has also curbed the driver pool.

A jump in Class 8 orders during the fourth quarter appeared likely to bring the truck capacity the industry desperately needed. But commentary from analysts and publicly traded carriers suggest it has more to do with buyers grabbing a limited number of production slots available at the original equipment manufacturers, which are dealing with production delays due to raw materials, parts and semiconductor shortages.

A consensus has formed suggesting newbuilds in 2021 will only meet or barely exceed the industry’s normal level of replacement.

“We continue to believe that carriers’ strong order numbers in the beginning of this year are a result of their attempts to get in front of the uncertain manufacturing timelines due to supply chain disruptions, which are affecting build numbers as evidenced by April’s results,” said Morgan Stanley analyst Ravi Shanker (NYSE: MS) in a report to clients.

North American Class 8 orders of 33,500 in April (up 689% compared to depressed orders from a year ago) fell 16% from March and failed to keep pace with normal seasonality. April orders were the lowest since September and indicative of an OEM production schedule that is largely full.

The equipment shortage extends throughout most modes, with truck availability not being the only problem.

Containers are still seeing slow turnarounds at West Coast ports with another freight surge underway. Already poor rail service has experienced a trickle-down effect from port issues and equipment at distribution centers and warehouses is being detained longer as shippers contend with their own labor issues.

Some transportation providers have announced plans to take on more containers and trailers in 2021 but the fleet additions will be staggered throughout the year and not likely needle moving, at least in the near term. Also, buyers of containers have to contend with build schedules at the manufacturers, which aren’t going to jeopardize favorable newbuild rates by potentially overbuilding.

With minimal capacity coming online, driver employment dynamics structurally altered and inventories still in need of replenishment, current fundamentals may not change all that much even as the year-over-year comps get tougher in the back half.

“We do not expect a large influx of supply as we continue to see production lines delayed, limited driver capacity, which has been further exacerbated by additional stimulus payments, and the continued closures of driving schools, which we believe, coupled with the strong demand environment, will keep rates elevated and propel the trucking cycle for quarters to come,” Shanker added. 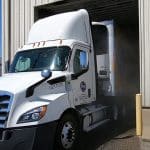 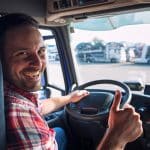